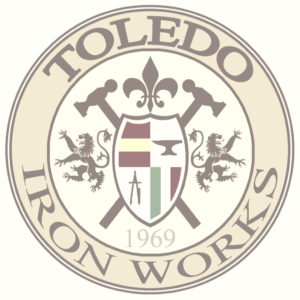 A little about who we are…

Established nearly 45 years ago in South Florida, Toledo Iron Works has become one of the most recognized names in the ornamental metals industry.

Toledo Iron Works was founded by Gregorio Suárez, and his son Guillermo Suárez Sr. in South Florida in the late 60’s. Gregorio was originally a Jai-Alai player, whose extensive trips to Europe at the early part of the 20th century opened up a thirst for creativity. Taking advantage of his popularity in Jai-Alai, Gregorio was able to secure apprenticeships in the world of blacksmithing. He continued to learn and master this craft throughout Spain and Italy under the watchful eye of the greatest masters of the time.

Eventually he would pass on his knowledge to his son and together would officially establish Toledo Doors in 1973. Guillermo Sr. would continue to lead the company, with his brother Rolando and father by his side, and establish Toledo’s door systems as a staple of single family homes in South Florida. Popularity grew immensely with the unique and elegant finishes offered exclusively by Toledo Doors all throughout the 80’s. Toledo Doors soon became Toledo Iron Works with the intention of offering a complete metals solution for new construction projects. In 1992, Guillermo Jr. took over the company and has since exponentially expanded the horizons of Toledo Iron Works. New projects and contacts have been established in Florida, New York, Illinois, Maryland, Virginia, throughout the Caribbean, and in South America (to name a few).

Now, nearly twenty-five years later, under the direction of Guillermo Jr. and his oldest son Bryan-Michael, Toledo Iron Works continues to enjoy success and prosperity by honoring a simple-time tested formula; choosing to build relationships with its customers based on trust, loyalty and reliability, thus experiencing consistent growth while continuing to offer the utmost in quality and service.

Following in the foot steps of his forefathers, Bryan-Michael Suarez is involved in day to day operations and focuses on securing new business and establishing new relationships. Learning every chance he gets Bryan-Michael, oldest of five brothers and sisters, is excited to continue the legacy that Toledo Iron Works has always offered their clients!

This philosophy is the foundation of Toledo Iron Works success. We understand that we live in a global market place and in order to enjoy long term success and growth it is of paramount importance that every client’s expectations are met, or better yet, surpassed!

After all, nothing ensures a referral more than a satisfied customer!

Building relationships with our customers thru trust, loyalty and reliability.

Time tested procedures and processes in place for your projects smooth success.

Minutes away from major airports, seaports and railways.